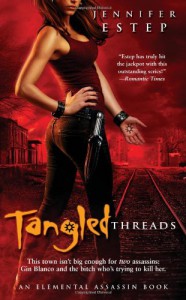 Gin is going to have to constantly look over her shoulder. Mab is getting pretty pissed about losing her men to the Spider. The assassin that Mab hires is insane. She takes joy in using her magic to destroy others. She isn’t in it for the money. She’s in for it the glory. She’s also a force to be reckoned with.

Gin definitely has her work cut out for her with Elektra. Not only does she need to keep herself alive, but she also has to keep Bria from falling victim to the assassin. There are definitely a lot of fight scenes where you are rooting Gin on, and others where you’re hoping she gets out of there as soon as possible.

Like her previous book the repetitiveness went on a little long. She’s constantly recounting things that had happened before, and I think without that it would have been a much better book.