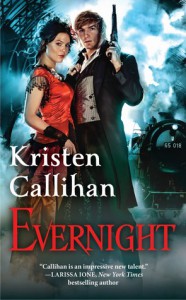 I've said before that I love this series.  The characters, storyline, and setting gets better with each book.

Will Thorne and Holly Evernight have a connection.  They each refuse to admit it.  Holly is a strong female character.  (Pretty much all of Callihan's female characters are.) Her biggest issue is that she doesn't let herself feel anything. She tries to compartmentalize everything into an experiment that she has to figure out. I adore Thorne.  Even though he's going mad, he is carefree.  He wants to show Holly that life isn't just about what she can prove, but what she can feel.

More paranormal creatures are brought into the story with this book.  We also get more glimpses of Adam, creator of the GIM.  I still can't figure out what exactly he is, but I hope we find out soon.  We also get to meet Queen Mab herself.  She's not exactly all warm and cuddly.  I pretty much hate her.  As we progress in the series I can't wait to see what new species Callihan brings forth.

One of my favorite things about Callihan's books is that we get to peek into the mind of some of the other characters.  With each little snippet we become hooked, and hope that the character will have their own story to tell.

I love the relationship that Thorne and Evernight have.  They bicker, but also learn that they just might need to rely on each other.  They each discover new things about themselves along the way.

I can't wait for the next book, and hope it's not too far off.