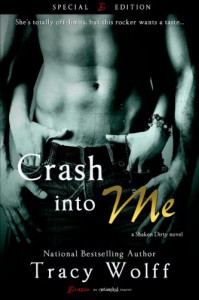 I absolutely love the characters Tracy Wolff has created in Crash Into Me. She creates a sexy, crazy ride that I am infatuated with.

Jamison is a great character. She's always been the "little sister," and just wants to be seen as an adult. She knows how to deal with the guys in the band. She has so much confidence for being the younger sister, and having to deal with the women that come in and out of the band's dressing room. I'd be intimidated as hell. Ryder is such a broken guy, but Jamison brings out the best in him. He's super protective, and is terrified to let his feelings for Jamison grow.

We get to follow the band Shaken Dirty on tour. Jamison and Ryder try not to let things go too far between them, but the harder they try the more they are attracted to each other. The wild night together, mentioned in the blurb, is probably one of the hottest scenes I've ever ready. Tracy Wolff did a great job of bringing these characters to life, and making you feel the realness of their desires.


Huge fan, and can't wait to read the stories of the rest of the band. Especially WYATT!!!