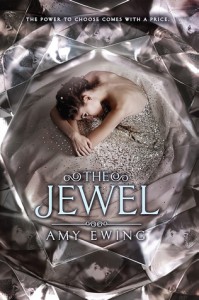 I really enjoyed the world in The Jewel, as twisted as it is.  You don't know who you should trust because pretty much everyone has their own agenda.  It's basically a catfight between all the females in the Royal families.  Everyone has to try to be the first to have their surrogate get pregnant.  But the things they put these young girls through is crazy.  There is constant fear of being reprimanded, and that fear is apparent in many of the girls.  I also don't like some of the plans that a few of the royaly have for


I really felt for Violet.  She's forced into a life she does not want, and tries to make the best out of it.  There are constant obstacles, and she's trying so hard not to let The Jewel break her down.  She's loyal to her friends from before the auction.  I love that she's so caring, and there are times she feels empathy for those that have been awful to her.  My only complaint is the romance.  I think it felt forced, and it would have even been a great story without the romance.

I think fans of Lauren DeStefano's the Chemical Garden and Perfected by Kate Jarvik Birch will enjoy The Jewel.