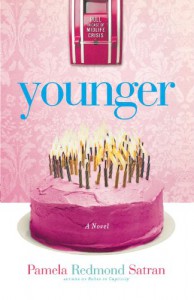 Younger is about a woman who is in her forties and wants to be younger.  I’m 30, but this book definitely hit home for me.

Alice wants to be able to get back into the publishing workforce.  She kept trying and they shot her down.  After her makeover she actually starts getting some attention from employers and guys.  I think the Satran did an amazing job of showing how age effects how others see you.  You are judged on your ability to do things and it works both ways.  Those that are younger seem like they don’t have a clue while those that are older don’t stand a chance in some situations.  I’ve definitely been on the receiving end of the young crowd.  I had a child young, and people assumed I wouldn’t be able to handle it.  Things didn’t work out with my child’s father and putting myself back out there was just as terrifying as the emotions Alice feels when she puts herself back out there as a “younger” self.  You wonder if you will be attractive because let’s face it, having a child changes your body.  Will anyone else find me attractive? Will they understand that you have other responsibilities besides dating? It’s freaking scary.  So many of the emotions that Alice goes through in this book, are ones that I have gone through as well.  I think the author did a fantastic job of making the problems Alice has relateable.

I did like the friendships Alice has with both Maggie and Lindsay.  Both play a role in her finding who she is, and helps her realize that nothing is wrong with being 44, and also having a life outside your children.  Especially when that child is grown.  I didn’t really care for Alice’s daughter, Diana.  She acts so bratty most of the time, and uses her parent’s divorce as an excuse.  It drove me crazy.  I also wish we had found out some things that happened with Diana and her sudden reappearance.

All in all, I think if you want to read a book that deals with the emotions of getting older, and trying to have fun at the same time, this is definitely a book that fits that.  I’m also super excited to see the show that will air on TVLand on March 31st.  I want to see how the book translates to television.