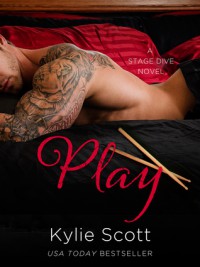 This one was probably my least favorite in the series.  Only because I ended up getting annoyed with Mal.

I adored Mal in Lick.  He provided the best comic relief.  In this one I think everything was too much of a joke to him.  I understand he was going through some things and people tend to be the funny guy to run from their own problems, but it seemed a little extreme with Mal.

I love Anne.  She is funny, and tries her best not to let Mal run all over her.  She's always had a crush on Mal, and being his pretend girlfriend is almost too much when she begins to actually like him.

I loved the funny moments in this book.  There's a broken bed incident, and it had me laughing so loud.  I also liked how the band groups together when they feel like one of their own is hurting.  It's great the friendship these guys have.

Even though this installment isn't my favorite, it definitely makes me appreciate each of the characters throughout the series.