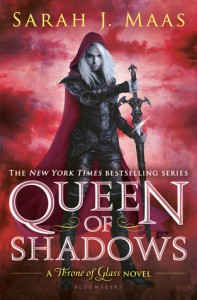 Reasons to read Queen of Shadows

I love getting lost in this story.  You never know which direction it's going to take. The side stories are as captivating as Celaena's story. You are rooting for characters you didn't think you would be. It is a little slow at times, but it didn't keep me from enjoying every minute of it.

Queen of Shadows is definitely a book that is amazing because of it's characters.  We get to see things through the eyes of many of them.  I think one of my faves is when we have Dorian's point of view.  There is so much going on there, and I need more.  We don't necessarily meet many more characters, but we get a more in depth look at how they see the events playing out.  Some are so vastly different.

Seriously, who the hell do you trust? Everyone has their own motives, and you don't know if they are making things better or worse.

While the action isn't heavy, the scenes that include fighting are phenomenal. There's one in particular that completely captured my attention, and shows that sometimes you don't have to destroy the other.

I think this more or less ties in with loyalty.  Because wow! There are some very interesting friendships forming in Queen of Shadows.  Ones that we would think unlikely.  But I guess when you have a common goal, those friendships and loyalties will hold strong.

QoS had my emotions everywhere.  I mean I went from happy to laughing to being pissed and everything in between.  There are things said that made me gasp because they were fueled with so much contempt.  Struggling to find your place has the characters emotions bouncing everywhere.  There were times when their emotions changed within seconds giving you a bit of whiplash.  But at those times I could understand where they were coming from even if what they said was awful.

I'm just going to say that sometimes things aren't what they seem, or what is implied.

This is such a great series, and the wait for the next book is going to be tortuous.  But I'm so excited for the series to continue.