Dirty Past (The Burke Brothers Book 2) 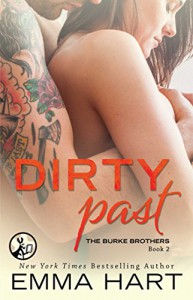 Oh Tate... how can you be such a jerk, but also so hot.  It's a question that will forever plague me.

Tate is Conner's oldest brother.  He's known for being a man slut, but maybe he'll find the woman that will calm his ass down.  He doesn't trust easily, but the minute he sees Ella he feels protective of her.  He doesn't know why.  Seeing him fight his emotions is pretty funny.  He doesn't know how to do sweet stuff.  He's never done it before, and finds himself trying to keep his hands, and thoughts, off Ella.  It proves to be pretty damn difficult.  I do love seeing him with his niece.  She's the only one that can bring out the big teddy bear in him.

Ella is running away from a dark past.  She's ashamed of how she allowed herself to be treated, and figured being the PA for Dirty B would be a great way to hide herself in plain sight.  She's not used to all the joking around the guys do, and sometimes feels a little out of place.  I was happy when she started giving their crap back to them.  She's witty, funny, and still trying to become the person she knows she's supposed to be.  Her ex is awful, and the threatening messages scare her.

Dirty Past has it's light moments but it also deals with abuse.  There were instances where I felt awful for Ella, but happy that she realized she should get herself out of the situation.  If you want parents to really dislike, wait until you meet Ella's.  They are horrid.  Even though Ella's past is dark, the book is filled with witty comebacks, laughter, and love.  It's definitely one of my favorites.