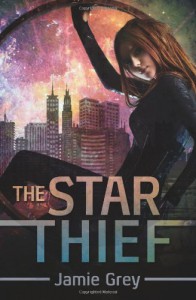 The Star Thief is a great example of a NA book, and also the perfect amount of science fiction.

I absolute love Renna. She’s spunky, and has a heart, even when her mind tells her to stop being so soft. She may be a thief, but she has a code she abides by. I love seeing her when she’s not kicking ass. Finn is smoking hot! Just sayin’. He’s got his own issues he has to deal with, but he makes a great leader.

The romance wasn’t rushed or anything like that. I think it progressed at a natural pace. I’m not saying that aren’t moments of crazy lustful thoughts, but that’s what it is at first, and I’m a big fan of that. I like how Finn and Renna have to work through their issues with each other. There are also some things from Renna’s past that come back to haunt her.

Star Thief isn’t an incredibly heavy book to read. There are some serious moments, but I had a lot of fun going on Renna’s adventure. I’m excited for the sequel. I want to know what craziness Renna is getting herself into.